The Daisy is a versatile cocktail family of drinks that has probably been the inspiration for several mid century cocktails we all enjoy today.

Picking a Daisy is the Hard Part

These popular cocktails have been around since at least the mid 1800's and are part of the Sour family of drinks. The Brandy Daisy has produced many alternatives and variations as it evolved. By the mid-1940's many recipes added new ingredients like Grenadine and powdered sugar. As you can see from Nancy's great grandfather's book Drinks (as seen in these photos) other juices like raspberry make an appearance. He even has a recipe for a chocolate Daisy! But it seems that by the mid century period, the Daisy became less complicated and settled on just a few ingredients that have stayed stable even til today.

The Daisy has inspired several famous drinks such as the Sidecar and, so I'm told, the Margarita -- which is the Spanish word for "daisy." One look at the list of ingredients below in the original recipe, and you can see that just substituting tequila for brandy gets you close to how we make them today.

It is claimed that the more recent 'it' cocktail of the 90's, the Cosmo, is a descendent of the Daisy's simple spirit/sweetener/fruit juice combination. Take out the Brandy and substitute it with Vodka, and once again you can see its roots (no Sex in the City reference, I promise).

Here are the Ingredients for Two Variations

Just choosing among all the variations of which Daisy to make can work up a thirst. So, to taste the evolution of the drink I've chosen two different recipes. One from the original Daisy recipes and another more modern version.

* As seen in The Bartenders Guide or How To Mix Drinks: The Bon-Vivants Companion, Jerry Thomas, 1876 2nd Edition

I decided to perform a bit of a "taste test" between these two Daisy recipes to see which one we would prefer. I found the modern recipe to be very drinkable and similar to a Sidecar. The Yellow Chartreuse gave it a more complex, floral, earthy flavor than more common orange liqueurs. The 1876 Daisy recipe tasted very smooth with none of the rough edges you might find in a Sour cocktail. I preferred the original recipe and Nancy really liked the modern version made with Chartreuse. By the way, if you're not familiar with Chartreuse, then you really owe it to yourself to get a bottle of this wonderful liqueur. I'm a sucker for anything made by monks using a recipe from the 1600's, and this does not disappoint!

When mixing up a Daisy, keep these things in mind for a successful batch:

Which Daisy cocktail do you prefer? Have you tried our two finalists? 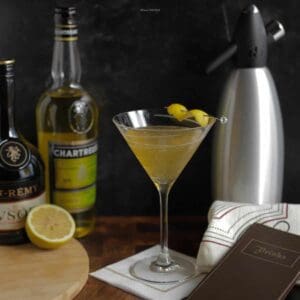 The variation of the Brandy Daisy from 1876:

Regardless of which recipe you choose, adding in a quality spirit will always make for a better tasting drink. Feel free to substitute bourbon or gin for the brandy. Nutrition is calculated for the modern version.