You may think the Margarita is a fairly new drink, but it has a long history of its own and is more than just a variation of a Daisy Cocktail.

Where Did The Margarita Come From?

It has often been said that the Margarita is a Daisy cocktail that substitutes tequila for brandy. After all, "margarita" means "daisy" in Spanish. While probably technically correct, the Margarita's origins are much more interesting than that.

Some say that Margaritas got their start in Mexico as Americans fled across the border to drink cocktails during Prohibition. There are several different stories that have the drink being invented from Baja to Juarez, and everywhere in between. Was it named after a showgirl named Margaret? No one can say for sure, but what they can say is that this cocktail exploded in popularity in the 50's and 60's and became a mid century favorite.

Like it's supposed 'parent' the Daisy, there have been a huge number of variations of Margaritas that have evolved over time. From sweet drinks to frozen slushes, this cocktail has evolved and grown along with its popularity.

One of the more popular versions of this classic cocktail is the Cadillac Margarita, which is made with premium tequila and served with a shot of Grand Marnier floating on top. This version made its first appearance in the 1980's when Patrón was introduced to the U.S. market. Wolfgang Puck included it on his restaurant menu, introducing the high-end margarita to his trendsetting Hollywood clientele. I had my first Cadillac Margarita in the late 1980's when a savvy waiter asked me to try it. It's now my favorite margarita drink, although I usually request the shot of Grand Marnier to be served on the side.

Even though there are many variations and flavors, you can't go wrong with the basic cocktail:

Remember to have some limes for garnish and salt for the rim of the glass.

Tips for a Successful Margarita

Keep it simple and you will enjoy a wonderful cocktail:

Also, don't forget to use a Margarita glass for serving. They come in a variety of colors and sizes and add a dash of flair to your cocktail.

How do you prefer your Margarita? On the rocks or frozen? Traditional lime, or another flavor? 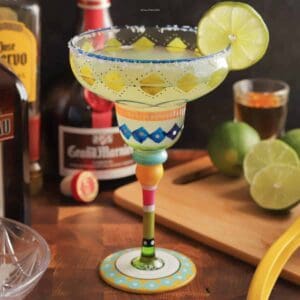 The Margarita is a South of the Border Delight