You don't need to be an international Ian Fleming super villain to enjoy a refreshing Rum Collins!

Rum is the Star in this Collins

When it comes to cocktails, almost anything that James Bond drank in the early, iconic spy movies is a perfect example of mid century style. This drink made its debut in 1965's Thunderball starring Sean Connery.

I always liked it when Bond went into the villain's lair and was offered a drink. You never knew what he was going to get; perhaps a vintage champagne or a swanky cocktail you'd never heard of. In this case, Largo (the villain) offered Bond and several of his henchmen a Rum Collins to drink. Sure, the Rum Collins is similar to a Tom Collins, but instead of gin, this one uses light rum and lime juice. The combination really gives the cocktail the Caribbean feel of the Bahamas, where the movie was filmed.

You may recall that we introduced the Tom Collins earlier. The Collins craze started in the late 1800's and continued to be popular during Prohibition because the gin was readily available, but tasted awful. Because the Tom Collins used sugar and soda water, it masked the poor-tasting gin. Over the years, there have been a number of Collins cocktails made with gin, bourbon and even tequila.

Ingredients for a Rum Collins

This tasty take on a Collins is pretty straightforward, and requires just a few ingredients:

And don't forget the ice -- this drink is best when it is served ice cold.

Here's a few pointers on serving up a great-tasting Rum Collins. 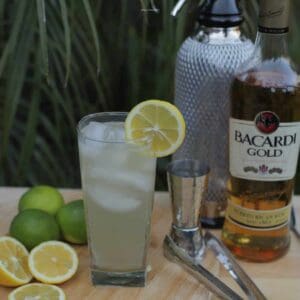 The Rum Collins is Good Enough to Die For

It's really worthwhile to use fresh squeezed lime juice rather than from a bottle for a really crisp, refreshing taste without added sugar. You can substitute lemon juice instead of lime juice, as there are variations of the recipe. The lime juice gives it more of a Caribbean feel and the lemon juice keeps it similar to a traditional gin Tom Collins.