This chicken fried steak with white pepper gravy is more tender and delicious than even Grandma used to make because it's made with ribeye rather than cube steak.

When someone asks me what my favorite comfort food is, chicken fried steak is at the top of the list. Kevin loves it too, and with fall arriving in a few days he has been craving it, so I made it this week. I was lucky to even get this photo shoot done; he nearly bit my arm off in the process. You see, we actually eat the food we photograph after our photo shoots. Many food photographers doctor their foods with things to make them photograph better, but render them inedible. We hate the thought of wasting food, so if it has been featured here we have either eaten it or one of our neighbors has. We rush it from the oven or stovetop to our photography room and then to the dining table. Bentley runs after us picking up any crumbs that have dropped along the way.

What Exactly is Chicken Fried Steak?

Cube steak is a term for meat that has been pounded flat by a meat tenderizer. The name comes from the shape left on the meat from the pounding, which is called "cubing." The cut of meat is typically top round or top sirloin. In some areas it is also called "minute steak" because it cooks up very quickly. It's called "chicken fried" because it is battered and fried like chicken.

A Dish With Strong Texas Roots

There's no way to know exactly who invented chicken fried steak, but it most likely evolved from German veal cutlets. Its early roots seem to come from Texas, quite possibly from German immigrants who settled there and used a more affordable cut of meat than veal to make their cutlets. However, various restaurants in the state of Texas lay strong claim to its origin.

My mom used to make chicken fried steak the traditional way with cube steaks. Served beside or over mashed potatoes, there was nothing more satisfying on a cold fall or winter night. It was a popular mid century dish for cost conscious cooks because it made lower priced, tougher cuts of meat tender and tasty after it was battered and fried. I've upped the game by switching to the more substantial, tender and flavorful ribeye steaks which are popular in Texas.

There are a Number of Variations of Chicken Fried Steak

If you have made chicken fried steak before, you may have dipped it in egg and buttermilk, and then in a flour, cracker or bread crumb mixture before frying. Our family makes it differently using no egg at all, but simply a salt water brining dip before coating. You may be tempted to skip or modify this recipe as a result, but just look at that picture! It has not been altered; the steak comes out that beautifully breaded and crunchy. You won't be disappointed!

Preparing the Oil for Frying

An electric skillet is ideal for making this dish because you can set it to the exact temperature. If you do not have an electric skillet, of course you can make it in a deep, heavy frying pan. Using a cooking thermometer designed to withstand the high oil temperature is helpful. Otherwise you can judge the correct temperature by simply touching a wooden spoon to the oil. If small bubbles form around the spoon, then the oil is ready for frying. If it is bubbling hard, your oil is too hot and you should turn down the temperature before frying. (Oil temperature that is too high results in food that is overcooked on the outside and undercooked on the inside.) If there are no bubbles, your oil is not yet hot enough. (Oil temperature that is too low will result in food that is soggy and soaked in oil.) 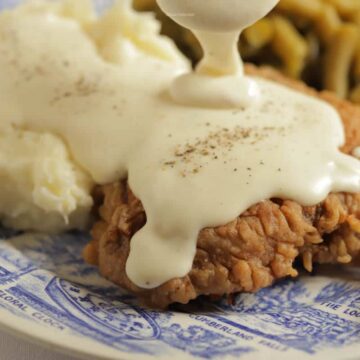