This is the best baked potato soup - creamy buttery potatoes, crunchy bites of bacon, gooey melted cheese...need I say more? This meal in a bowl is pure comfort on a chilly night.

I've been in a soup and stew mood this week as the weather turns chillier for fall. No, we don't get the crisp cold days here in L.A. that many other places get, but it's not unusual for temperatures to drop into the 40's at night, and that's cold enough for comfort food!

Soups were popular in mid century because they were economical. You could toss vegetables in with water, add some seasonings and whatever meat or pasta was available and come up with a filling meal that could be stretched to serve many. Even if you had a tough cut of meat, boiling would tenderize it, and the seasonings would add flavor.

I was flipping through a box of mid century recipe cards when I came across this one for baked potato soup. Kevin loves potato soup; his mom used to make it all the time. After trying this recipe I have modified it slightly to add a little more flavor and creaminess to it. I cut the amount of milk it called for, and added in some chicken broth and half-and-half -- creamy delicious perfection!

If You Need A Little Time Saver...

If you're in a hurry for soup, you can save some time by dicing the potatoes, then boiling them for about 30 minutes until they are fork tender. The texture of a baked and boiled potato are different, but I don't notice a difference in the flavor or texture of the potatoes when they are mixed with everything else in the soup.

Leftover baked potato soup will keep in the refrigerator for 3-4 days and can be reheated on the stovetop. It will be very thick, so add milk to desired consistency.

If you're looking for hearty soups, also try our split pea and ham and navy bean soup recipes. 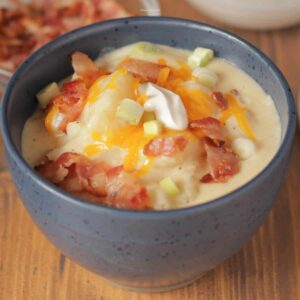 If you want to cook the potatoes faster, you can cube them and boil them for about 30-35 minutes until they are fork-tender, then drain them and set aside for the soup. I have not noticed a difference in flavor between using baked or boiled potatoes.