This American Navy Bean soup dates back to the 1800's and was a mid century staple because of its simplicity and good taste.

Navy bean soup gets its name from its origins as a staple on US warships. Due to its low cost and high nutritional value, it was an inexpensive way to feed hungry sailors and soldiers. It first appeared in a Naval cookbook in the early 1900's but had been around for much longer than that. The common, small white bean used in this soup is native to the Americas. There are many names and versions that encompass the family of ham and bean soups. The US Senate restaurant's famous "Senate Soup" is a very close cousin to Navy Bean soup.

This soup could be made with just a few things usually kept on hand. Most cooks had a canister of dried beans on the counter at all times. It was also a good way to use leftovers from ham dinners which were also a frequent item on the menu.

How to Cook With a Ham Hock

The 1950's recipe card above calls for a piece of salt pork in the recipe, but cooking the soup with the bone of a ham hock will give it a richer flavor. If you're making a holiday ham, keep the bone with some meat on it and use it to make soup. If not, you can buy a ham hock from your local grocery store or meat market. I bought this one for a few dollars from our local Honey Baked Ham store. It came with plenty of meat on the bone. I trimmed most of it off, leaving some for flavor. The trimmed ham was chopped and kept in the refrigerator and added to the soup upon serving. Cooking all of the ham with the soup leaves it too dried out, so reserving some cooked ham to add just before serving is best.

Just a Few Ingredients are all that's Required for this Soup

The simplicity is what made this soup such a standout for mid century cooks. With only a few main ingredients cooks could have a hearty cold-weather meal ready to go.

This version of the soup is the simplest one. At first glance it may seem like it doesn't have enough ingredients to give it flavor, but rest assured this was some of the tastiest soup I've ever eaten. Of course you can always add to it, but the flavor is delicious as is.

While there are not many steps to making this soup, with these pointers you'll be able to cook it up right every time.

On chilly autumn days, this soup is a perfect warm up. Let us know if you try it and what you include in your version of it. 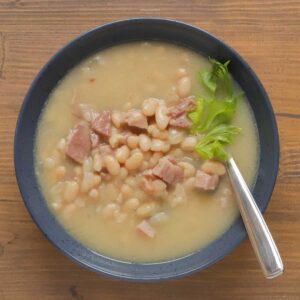 Modern twist:  You can give the flavor of this very traditional recipe a pop by adding 1-2 cloves of garlic and a sprig of thyme. To make it a more substantial meal, add a half cup of chopped or shredded carrots and 1-2 chopped russet potatoes and serve with chopped ham. Soak the beans for 4 hours or overnight in cold water to reduce the prep time. Make several hours or a day before serving to allow flavors to soak in.  Kept in an airtight container in the refrigerator, the soup will keep for 3-5 days.