The Blue Hawaii is a tropical mid century favorite due to its sweet and tart flavor and ocean blue color.

Any Color as Long as its Blue...

Many cocktails have a murky past and it is not certain who invented them or where they came from. The Blue Hawaii is different because we know exactly where and how it got its start.

In 1957 an enterprising salesman for the Dutch distiller Bols, asked Honolulu's Hawaiian Village Hotel head bartender, Harry Yee, to invent a cocktail using their Blue Curaçao liqueur. Harry experimented for a while with various ingredients and eventually landed on this recipe, which incorporates different base spirits, fruit juices and the famous liqueur which gives it its color.

The Blue Hawaii is Fit for The King

Harry also gave the drink it's name, Blue Hawaii. Many people thought this was because of the Elvis Presley movie with the same name. But unfortunately, that is just another Island myth. Harry named it after a song from a much earlier Bing Crosby movie, but the same song was featured in both movies. So indirectly, Harry named Elvis' 1961 Technicolor tropical smash movie, Blue Hawaii.

I'm not sure if it was the cocktails or the movies, but Hawaii soon became an exotic tourist destination, and in 1959 Hawaii became the 50th state in the union.

Harry went on to create many more tropical cocktails which caught on in Hawaii and soon spread to the mainland. The Tiki craze was based on a faux tropical culture and was soon featured in movies, songs and culture. Don the Beachcomber and Trader Vic's bars and restaurants became very popular destinations for their Tiki drinks and cartoon-like take on Polynesian life.

Ingredients for a Blue Hawaii

Like many tropical drinks, this cocktail may seem complicated but its really quite simple with only a few ingredients:

The hurricane glass is nearly as important as the drink itself. If you like Tiki drinks or tropical cocktails, you may want to invest in a set. Be careful though, these are large glasses and you'll find yourself mixing up a larger batch of drinks just to fill it!

And of course you need to top it off with fresh fruit and a paper umbrella to instantly transport you to the tropics.

Even though this is a simple drink to mix, here's a few things to keep in mind:

What is a popular drink in Hawaii?

There are several drinks that come to mind and certainly they can be Tiki related or not. While traveling there myself, I enjoyed the Blue Hawaii, Blue Hawaiian and of course the Mai Tai.

Blue curaçao is a Caribbean liqueur made from dried peels of the Laraha citrus fruit and is merely colored blue. The blue curaçao liqueur is said to have been created by the Dutch Bols distillery.

Do you have a favorite Tiki drink? Which do you prefer, the Blue Hawaii, or maybe a Blue Hawaiian? 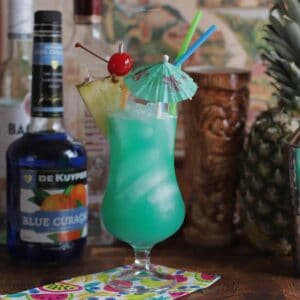 Feel free to put your cocktail through a blender if you'd prefer a frozen version. A dash of spray whipped cream makes it more decadent!