Simple baked spaghetti combines the ease of spaghetti with the complex flavors and gooey cheese layers of lasagna. It's a meal the whole family will love!

Where Did Spaghetti and Meatballs Originate?

Most Americans associate spaghetti and meatballs with Italy, but it is originated in the United States. Actually, it's not served at most restaurants in Italy unless the restaurant caters specifically to American tourists!

Italian immigrants that settled in the U.S. in the early 20th century did not have access to the same ingredients that they had in Italy. Dried, packaged pasta was inexpensive and readily available. Marinara sauce was made from canned tomatoes because fresh tomatoes were hard to find. In the U.S. beef and pork were easier to obtain and less expensive than in Italy (where a variety of meats and seafoods were used), so meatballs were made from that. The meal's flavors were reminiscent of Italian foods, but the actual dish of spaghetti and meatballs originated in America.

Baked pasta, also called pasta al forno (meaning "pasta baked in the oven") has existed in Italy for centuries. Originally it was a way for chefs to use up whatever ingredients they had on hand, so it was different every time it was made.

In Italy, baked pasta takes many forms including baked ziti, baked rigatoni, and lasagna to name a few. One form it doesn't take is baked spaghetti -- over there, baked pastas are made from large, hollow noodles such as ziti, mostaccioli and rigatoni. The U.S. adapted those recipes with the popular thin spaghetti noodle, incorporating all the wonderful flavors into a spaghetti and meat sauce dish that can be cut into slices.

These easy-to-follow steps demonstrate how simple it is to make this luscious baked spaghetti!

How long do you cook pasta before baking?

Cook noodles just until al dente -- the very minimum time indicated on the package. If you boil it longer and it gets too soft, it will turn to mush in your casserole.

Do you bake pasta covered or uncovered? 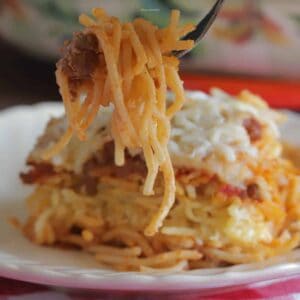