Penne Pasta in Vodka Sauce is a creamy, rich and flavorful dish that cooks up in less than half an hour. Served with garlic bread and a glass of wine, it's sure to impress your guests!

I have turned again to the handmade family cookbook of my Italian-American friend, Mary Ann. She's a Rochester, New York native who compiled longtime family recipes in a charming three ring binder with a photo of her mom on the front. Her son Joel happens to be my neighbor, and he generously allowed me to raid the amazing recipes, of which this is one. He remembers this being a favorite dish that his uncle made for the family.

Both Italy and America lay claim to the origin of this dish. The evidence seems to suggest that it was on the menu at Dante, a restaurant in Bologna, Italy in the early 1970's and was popularized in the U.S. after that. Regardless of its origins, this is one fun dish to make and eat -- it's made with one full cup of vodka! We loved adding alcohol to our food in mid-century, didn't we? Don't worry if you don't like vodka, though. It blends in with the other flavors so you can't actually taste the vodka itself.

When I made this pasta dish, I did make a few modifications. Mary Ann's version calls for half and half, which would cut down on the fat and calories. However, if I'm making a pasta dish like this, I'd rather have the extra richness and thickness of heavy cream, so that's what I used. However, half and half is certainly an option.

I also added in ¼ cup of chopped Italian flat leaf parsley for extra fresh flavor. Speaking of extra flavor, many vodka sauce recipes call for pancetta. I did not add it this time, but I included it as an option on the recipe card. Kevin does prefer the version with pancetta, while I prefer the vegetarian option. You could also use bacon or shrimp in place of the pancetta.

Here's what you'll have to have on hand to make penne alla vodka:

There is Some Alcohol In The Finished Meal

It's important to note that this dish does not cook for very long, so all of the alcohol does not cook out of it. According to the USDA, after 15 minutes of simmering, roughly 60% of the alcohol is cooked off. It takes a full 3 hours of simmering to completely cook off the alcohol content in a sauce. Considering that it is being served diluted and with a heavy pasta, you are not likely to feel any affects from the alcohol. However, if you are avoiding alcohol for any reason or debating whether to serve it to children, this is something you should keep in mind.

Other Italian Recipes to Try 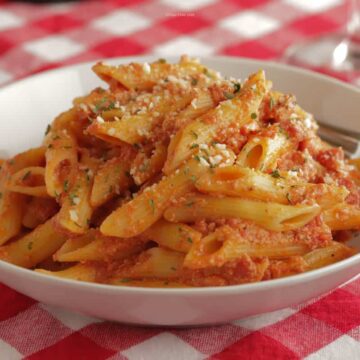 Nancy Blackstone
Penne Pasta in Vodka Sauce is a creamy, rich and flavorful dish that cooks up in less than half an hour. Served with garlic bread and a glass of wine, it's sure to impress your guests!
5 from 1 vote
Print Recipe Pin Recipe
Prep Time 5 mins
Cook Time 23 mins
Total Time 28 mins
Course Main Dish
Cuisine Italian
Servings 6 Servings
Calories 886 kcal

You can substitute half and half for heavy cream if you prefer In place of pancetta, you can add bacon or shrimp