If you love pecan pie but don't have the time to make one, these pecan pie bars are quick and easy to whip up and are absolutely scrumptious!

Pecan pie is known as a specialty of the South. Pecans originally grew along areas that received water from the Mississippi River. They were propagated by Native Americans who made the first versions of this popular dessert. Now most pecan farms are found in Georgia.

The earliest recipes for pecan pie emerged from Texas in the 1920's. But when Karo syrup printed a copy of the recipe on their corn syrup bottle in the mid 1920's, it became popular across the country.

Pecans Are Associated With The Winter Holidays

Pecans are often associated with Thanksgiving and Christmas recipes. That's because they are harvested beginning late in September through November, which gets them to your table just in time for the holidays. I use pecans on top of my sweet potato casserole, in Kevin's favorite Christmas cookies, and in these wonderful pecan pie bars!

Origin of This Recipe

This mid century handwritten recipe is from my friend Susan's 96-year-old Aunt Helen. I was thumbing through her recipes one day and when I came across this one. As soon as I read it I knew it would be fantastic! Aunt Helen lived in the Hollywood Hills during the mid century years, and is still living here in Los Angeles. She doesn't cook anymore, but other family members are carrying on the tradition of cooking her well loved recipes. And now you can, too!

It only takes a few ingredients for these chewy and delicious bar cookies:

These are fast and easy, so why not whip up a batch now? Let us know what you think after you try them! 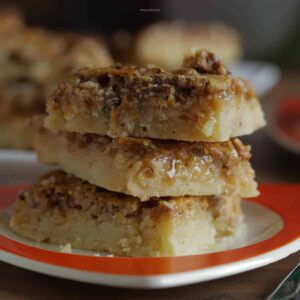