Another forgotten mid century classic cocktail combines scotch whisky and a liqueur made from scotch and honey for a smoky sweet delight.

The Rusty Nail is a relative newcomer to the scene as it appears to have been created in the 1960's by a famous New York bar. This drink is a duo cocktail, meaning that there are only two ingredients. Don't let the simplicity fool you though. The Scotch provides a smokey smoothness and the liqueur, Drambuie, is a sweet complex blend of scotch, honey and spices.

Drambuie is a wonderful liqueur that has been produced in Scotland since at least the late 1800's from a secret blend of scotch, honey, spices and herbs. I can still remember their advertising jingle from when I was a little kid--back when they could advertise alcohol on TV.

Some versions of the recipe call for equal parts scotch and Drambuie, but I prefer to go the more traditional route and use more scotch than Drambuie so that I get the full effect of the smokey whisky.

The list of ingredients is very straightforward for this mid century cocktail.

This cocktail is perfect to pour into an Old Fashioned glass. Use a large ice cube to keep it cold while you sip it. You can always use a twist of lemon as well to give the drink more of a citrus taste if you like.

Tips for a Successful Rusty Nail

This cocktail was probably so popular because it was so tasty and simple to put together. But I will invoke my major rule for cocktail making:

Which version of the Rusty Nail do you prefer? More whisky or equal parts ingredients? 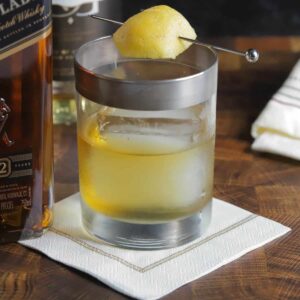 The Rusty Nail is Double Scotch and Honey Goodness.

Feel free to mix with equal part ingredients for an even sweeter drink. Remember to use a quality blended scotch.