Stuffed pepper recipes first started popping up in cookbooks in the 1890's. Virtually every country has their own unique version of this recipe.

In the U.S., stuffed peppers were at peak popularity in the 1950's. Like many recipes of the mid century era, it contained meat stretched with a starch like crackers, bread crumbs or rice. Add a few vegetables and tomato sauce, cook them inside the peppers, and you had a filling and budget-friendly family meal.

Mid century cooks did not have easy access to the many spices we have in our kitchens today. Modern recipes for stuffed peppers often include a variety of seasonings and even cheese toppings.

Origin of This Recipe

This mid century handwritten recipe was given to me by my friend, Anne. It was written by her maternal grandmother, "Mama Leigh," who was from Bedford, Virginia. Mama Leigh lived to the ripe old age of 100, and in honor of her 100th birthday a family cookbook was made to preserve her recipes. I highly recommend doing this for your family -- there are so many recipes of my grandma's I wish I had. I cherish the few that I do have!

What is the Difference Between the Colors of Bell Peppers?

Green yellow, orange and red bell peppers are all the same variety of pepper in different stages of ripeness. Green is the least ripe, and red is the most ripe. The color does affect the flavor, with green being the most bitter, and red being the most sweet. I like to use a variety of colors because it makes a beautiful presentation on the table!

To make this recipe, you will need:

To prepare a pepper, wash and dry it, then cut the top off. Using a spoon, remove the center seed pod and shake out any remaining seeds. Use a knife to cut any protruding inside ribs.

Mama's Leigh's recipe feeds a crowd, as it calls for 2 pounds of beef and 12-15 peppers. I cut it in half which perfectly filled 6 peppers. I also added some garlic and Worcestershire sauce for added flavor. In an effort to keep it gluten free I used rice, but as her recipe indicates you can use cracker crumbs, or even bread crumbs or Panko.

Some modern stuffed pepper recipes call for a lot more tomato sauce, seasonings, and as mentioned earlier, cheese on top. I like this recipe because it stays true to the original vintage taste without overpowering it with a lot of other ingredients. It's true 1950's comfort food! 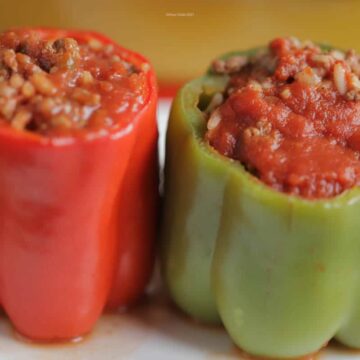 For some added texture, add ½ cup of celery to the ground beef, onion and garlic while browning. In place of rice you can substitute cracker crumbs, bread crumbs or Panko.