This birthday favorite and all occasion classic is as delicious as it is beautiful. Whether you're celebrating or just satisfying chocolate craving, this cake will have you craving seconds.

I was sitting up in my hospital bed when my girlfriend Liz walked in with her mom and two year old son, Carlo. I had recently turned 38 and had a serious heart attack -- a complete heart block -- and just had a pacemaker implanted. Everyone, including myself, was completely stunned by this odd occurrence at such a young age. So cards, flowers, and candy were pouring in. Liz sat Carlo down on the bed next to me, which instantly cheered me up. I started talking to him, and he stared at me with a skeptical look on his face. I reached over to my bedside table and grabbed a box of chocolate, took out a piece, and handed it to Carlo. "Want some chocolate?" I asked. After all, what better way to make friends than with candy? He took it from me and stuck it in his mouth. His face lit up with a big smile! "He likes chocolate?" I asked Liz. "I don't know," she deadpanned. "That's the first time he's ever had it." OOPS!

The Origins of Chocolate Cake

Chocolate is universally loved, and chocolate cake is the most popular cake for birthday parties and other celebrations across the globe. It appears to have originated around 1900 after Rodolphe Lindt, in Switzerland, made a silky smooth version of chocolate that was easy to add to cake batter. For roughly 100 years or so prior to that, chocolate was primarily used in drinks.

My favorite handwritten recipe book has this from-scratch chocolate cake recipe dated 1950. The photos on this page show the chocolate cake using the exact recipe as handwritten below. The cake was beautiful and had a good, chocolatey flavor, however the consistency was drier than what we are accustomed to today. That's because it doesn't contain any butter and/or oil. We also had to really stretch the frosting to cover the entire two layer cake, including the center. So in my final recipe card I have adjusted the ingredients to produce a version of this chocolate cake with buttercream frosting that is more moist and with a larger quantity of frosting, more in line with our tastes 70 years later. Try both recipes and let me know what you think!

For the cake you will need: 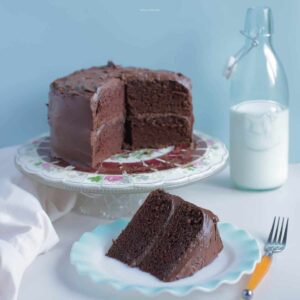