Watergate salad's retro combination of pudding, pistachios, and pineapple blended with whipped topping will transport your taste buds to the 1970's!

Is it a Salad or Dessert?

In the mid century years it was common to have a sweet fruit dish served as a salad, either before or with the main course. Items like Waldorf salad, Ambrosia salad, and gelatin fruit molds were mainstays of mid century meals. My Midwestern mom and grandma almost always served a fruit salad with dinner. Kevin's Southern family served fruits exclusively as desserts, so when I make a fruit dish we argue about when to eat it!

These days, it's rare to be served a fruit salad before or alongside the main course. And I have to admit, this sweet salad with pudding and whipped topping tastes much more like a treat than it does an appetizer or side dish! If I were serving it as a dessert, I would add a dollop of topping and a cherry on top. I would leave those off and just sprinkle the top with a few pistachios if serving as a salad.

Where Did The Name Come From?

While the exact origin isn't known, it is thought to have been inspired by Watergate cake. The first known published recipe for the frosted pistachio Watergate cake ran in the Washington, D.C. area in September of 1974, one month after Richard Nixon resigned as President of the United States. Various articles have said it was so named because of all the nuts that are in it, and it has a huge cover-up (a heavy layer of frosting on top.) In 1976 Jell-O Brand introduced instant pistachio pudding, and shortly thereafter Watergate salad recipes starting appearing. Its similar to Watergate cake with nuts in it and ingredients that are all covered up with whipped topping.

This handwritten gem is part of my mid century recipe collection. I often have to make a few updates to the older recipes to make them easier to prepare and more appealing to the modern palate, but not this one. I made it exactly as written and it was fast, easy, and absolutely delicious!

Here's what you'll need to have on hand:

It only takes a couple of minutes to mix everything together. Though our handwritten recipe says it needs to chill for a few hours or overnight, after an hour in the refrigerator ours was firm, chilled, and ready to eat!

Both Kevin and I were a little apprehensive when I began preparing this pale green concoction. We weren't at all sure about the pineapple, marshmallow and pistachio combination. But we quickly changed our minds after the first bite! I will definitely add it to my potluck rotation, as the cute retro appearance and sweet, creamy taste are absolutely irresistible! If you're throwing a vintage party, this dish is an absolute must-have! 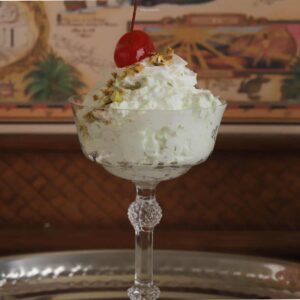 Watergate Salad - A 1970's Dessert That's So Good, It's Scandalous!

Light whipped topping can be used if you prefer If you don't have pistachios, you can substitute with your favorite nuts