On a chilly night, nothing is more comforting than a big bowl of homemade chicken and dumplings. Tender chicken cooked in homemade broth and from-scratch dumplings served in a creamy dumpling sauce are absolutely irresistible!

In Illinois, my former next-door neighbor, Jody, made the BEST chicken and dumplings. After raving about her dinner, she offered to have me come over and make it with her. In my opinion this is the best way to learn, because an experienced cook can fill you in on all the details that you don't get from reading a recipe. I'm talking about things like visual cues, shortcuts, and what to look for while taste testing along the way.

This from-scratch dish of hot and hearty comfort food takes a couple of hours to make from start to finish, and is so worth it. I love to make it on a Sunday, because it's great to have the leftovers after a busy Monday back at work.

Cook a Whole Chicken, or Parts?

When I first began making this dish, I cooked a whole chicken. There is something to be said for making the chicken stock with the bones. It adds both a boost of flavor and nutritional value.

I switched to using chicken breasts, mainly because Kevin only likes white meat and it was hard to get enough white meat from one chicken. Also, I didn't know what to do with the remaining dark meat and I hated to discard it. Second, removing the meat from the bones was time consuming, and inevitably a small chicken bone would find it's way into the meal. Third, it's just easier to use a 1.5 - 2 pound package of chicken breasts, and we didn't notice a difference in the final taste.

If you prefer to use a whole chicken, choose one that is 4-5 pounds. Boil it for 1-½ hours using the chicken stock recipe, then carefully remove the meat from the bones and set it aside, making sure there are no bones left behind in the broth. Then continue following the recipe.

What Kind of Dumplings Are in This Dish?

This recipe calls for Southern style flour dumplings, also called pastry dumplings. The texture and flavor is like a thick noodle. In this dish, this dumpling is far superior to a bread dumpling made from a biscuit mix.

Don't be intimidated by making homemade dumplings; these are easy! You can mix the dough quickly in one bowl, roll it in a ball and chill it for a half an hour. Then you simply roll it out and slice it with a pizza wheel. Fool proof! Don't worry about rolling the dough into a perfect rectangle...mine turned out heart shaped! You get no points for symmetry, and it doesn't impact the look or taste of the final dish, so why stress over it?

How Much To Make

I usually roll out one half of the dough and make one set of dumplings on the first night. The next day I roll out the second half, cook them in leftover heated broth and add them to leftover dumpling sauce. (If you don't have leftover broth you can cook them in a can of heated chicken broth.)

I find that this recipe makes plenty for my husband and me for 2-3 meals. I keep the leftover broth on hand, as the leftover dumpling sauce will thicken overnight in the refrigerator. On the second night I heat up the broth and use it to thin the dumpling sauce and stretch it out a bit.

If you are feeding a group of people and need to make a large amount, you can make both batches of dumplings. After you cook the first batch of dumplings, remove them from the broth and set them aside, then toss in the second batch for another ten minutes.

Jody often made a double batch of dumplings and dumpling sauce to reserve for leftovers. If you need a larger quantity, here's what to do:

Serve with some hot rolls or buttered bread and enjoy! 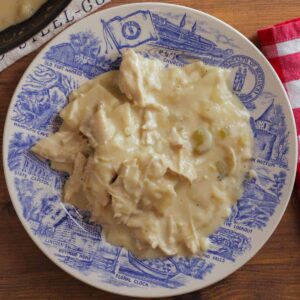