My neighbor Susan's 96-year-old Aunt Helen has a collection of hand written recipes that she has built over many years, and I was lucky enough to borrow them. This is one that they made frequently. Kevin took one look at the name of the recipe and said "I could be eating brownies in 20 minutes? What are we waiting for?" So I turned on the oven and mixed up a batch!

What is a Jelly Roll Pan?

I love to make brownies, and I usually make them in an 8 x 8 pan or occasionally a 9 x 13 pan for a double recipe. But I had never made brownies in a jelly roll pan. In fact, I didn't even know what a jelly roll pan was! It is a roughly 10 x 15 sheet pan with 1" high sides that is usually used for making cake rolls. It is smaller than a half-sheet cake pan which is 12 x 18. You can use either one, but I prefer the 10 x 15 jelly roll pan because with the half-sheet cake pan the brownies (or whatever you're baking) will turn out much thinner.

Comparing These to Modern Brownies

What I love about these brownies is the very soft, fluffy, cake-like bottom layer that's not too sweet, topped by a firm, solid, sweet layer of icing that's almost like a thin layer of fudge. The brownies are slim which makes them a nice and light dessert or snack. Modern brownies tend to be much thicker and chewier, often with candy, caramel, nuts or chocolate chips inside. While they both have their merits, the speed, simplicity and lightness of this mid century recipe can't be beat. Modern brownies seem to taste best warm out of the oven, but these are better after they have had time to cool completely, even overnight, so that the icing has properly solidified into its fudge-like candy coating.

Sheet Cake Brownies are Fit For a Crowd

If you need a dessert recipe to feed a lot of people, this is the perfect one because it will yield roughly 35 2-inch square servings. My neighbor used to take these brownies to share at work. It would also be great for a picnic, potluck, or a large holiday gathering.

A Couple of Notes About the Hand Written Recipe Card

The hand written recipe card says to use a jelly roll pan, but gives its dimensions as 12 x 18 which are actually the dimensions for a half-sheet pan which is larger. These pans are easily confused, but there is actually quite a bit of difference in size and your recipe will turn out differently depending on which you use. After making this recipe I believe the intended pan is a jelly roll pan and not a half-sheet. Therefore, the correct pan dimensions will be somewhere right around 15 x 10 or slightly less.

Also, the hand written recipe card says to use 1 box (2 lb.) of powdered sugar for the icing. I can assure you that it should say 1 box (1 lb.) of powdered sugar for this recipe. It was impossible to even attempt to incorporate 2 lbs. of sugar in the mix. Since I had followed the handwritten recipe and added 2 lbs. of powdered sugar and found that it was way too much, I simply doubled all the rest of the ingredients and made a double recipe of the icing. I spread the entire double recipe of icing on top of the brownies, which gave it an extra thick fudgy topping. Next time I might just do it on purpose, it turned out great!

Now that we know how to make them, let's bake some old fashioned brownies! 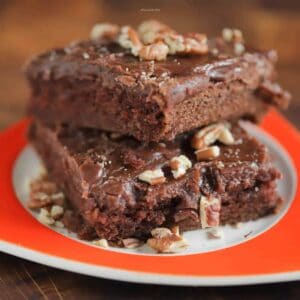